Quantum Computing | Why it is Exciting for Business 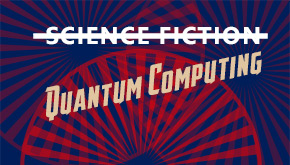 Since the 1960s, the power of computing has grown exponentially and is quickly reaching the physical limits of any further growth. Quantum computing is the next phase of computing as it is in its infancy and looks to have unlimited growth potential. This is because it is not bound to the laws of standard physics you learned in school. Quantum computers process at such a small size it behaves with quantum physics – which is a truly strange world.

Computing as we know it today is essentially billions of light switches (transistor) on a piece of silicon that are individually either on or off (binary bit). Yes, it is that basic and “brainless” so to speak. However, with that simple task, a computer can process anything from simple math to Minecraft.

What is Quantum Computing?

If a standard CPU is like a standard 2D movie, then quantum computing is 3D. With a 2D movie, the digital projector just needs to know if a color on a pixel is off or on (binary bit) while displayed onscreen. A 3D movie project also has to process if the color needs to be perceived closer or farther away (Qubit) – and make sure the 3D glasses understand it too.

Like a 3D movie, quantum computing is fundamentally immersive which helps if there is context to the data being processed. I believe we will find quantum computers process closer to how a human brain can process complex tasks. In the future, I believe true creativity within artificial intelligence will only be attainable through qubits/quantum computing. Unlike a human brain though, quantum computers are massively effective with needs like digging through databases to cracking encryption codes – which could take standard CPUs a millennia to finish. You simply could not do either of these tasks with your own mind.

Why is standard computing at its end?

The problem is a CPU as we know it is reaching a size of 12-16 nanometers – smaller than many viruses or even good ol’ blood cells. This is why there can be more computing power on your phone these days then room-sized supercomputers not too long ago. When you work with anything that small, quantum physics takes over and this causes issues for a standard CPU.

A standard transistor that is slightly bigger than an electron would have issues with electrons breaking the laws of standard physics. They could pass right through the light switch randomly and at will. This would bypass the ability of the transistor to function correctly at that size. Basically, this would be similar to your living room light randomly turning off and on and even changing colors or intensity.

Why quantum computing will be exciting for your business network

Fortunately and unfortunately, quantum computing is not science fiction and in use today. Maybe not today as they are billions of dollars, but in the not-so-distant future it will be exciting for your business. If they were the standard today, a quantum computer isn’t going to do much for Outlook or Windows 10. However, for any database driven application – like your ERP or SaaS – a quantum computer or server would be able to process at immense speed and improve efficiency – i.e. ROI.

Quantum computing as of RIGHT NOW is also unfortunate in my opinion. This is because network security is not ready for it and many of the security breaches in the news may represent that fact. 1st world governments, academia, and large corporations already have quantum computers in place and are computing complex tasks. From market data collection to 3D galaxy mapping to hacking encryption keys – quantum computers are here and in use.

The next 5 years will be a brave new world when it comes to privacy, security, and technology as a whole. Quantum computing at this time is exciting, but also a double edged sword. Microsoft, Google, and other software vendors are already in process or complete with writing software to function on quantum computers. Maybe the iPhone 15 will be quantum?