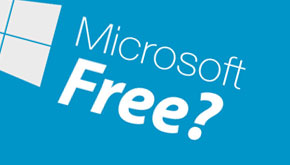 Windows 10 Free is probably not far off

For years now starting with the launch of the original iPhone, Operating Systems, or an “OS”, have been slowing moving to the free model and I believe Windows 10 free will be a reality soon . Microsoft Windows is the last hold out and it is already showing that they may be changing. Android is free, iOS is free, Linux is free, and even OSX has been free since 2013! Their Windows-based phones were a total disaster due to being the only kid on the block charging for the operating system!

Windows used to be almost 50% of Microsoft’s revenue, but now it is shrinking daily. From managed it service providers like us to the consumer, they are pushing “consumption” to their cloud azure products now for the primary revenue goals. I think that makes sense, as long as they can truly keep up with 2M or so hack attempts on their infrastructure on a daily basis. I recently toured their cyber security facility in Redmond, and it was definitely an issue they are trying to stay ahead of.

Windows 10 Free is probably just for the home user

With the advent of the free upgrades from Windows 7+ to 10S, I don’t think the consumer will be paying for your home version of Windows 10. Your company will continue to have a paid Windows product. I would be massively surprised if Windows 10 Enterprise was free. Windows 10 free also means consumer devices like laptops and PCs may be cheaper. However, it is possible that agreement is already in place with the manufacturers and folks like Lenovo are finally just enjoying some margin on computers again.

Another struggle Microsoft has had is they have multiple app stores which causes confusion. With just 1 or 2 stores I believe they will see more success. While I was out in Redmond, I did catch they were currently working towards a better app store experience and integration.

I look forward to the future of a Windows 10 free and hope to see it a reality in 2017!